We were approached by a large insurance provider to improve their Save Team processes.  Customers who call to cancel their policies are transferred to these customer service ninjas, in the hopes of finding just one more bundle to get them to stay. The Save Team also handles outbound calls to preemptively try to sooth customers who will get a rate increase or who  are not signed up for auto pay with the deadline approaching.  Their current process involves a lot of Excel and prep work between several systems to pull up customer information, sometimes while the customer is on the phone.  Additionally, for each save an employee records, they receive a bonus if the policy is still active after 60 days.

We began by listing all the current metrics that were being tracked.  The last thing we wanted was for a KPI or feature be be accidentally dropped in the new application.  No matter how intuitive the new application is, stakeholders and users would be fixated on that missing piece that they were used to seeing.

After all the metrics were accounted for, we began brainstorming what other metrics would be useful to include. We decided that additional information would be valuable to show, and added: Prior Premium, New Premium, Premium Change, and % Premium Change. With these added metrics, the user would be able to quickly see premium changes and take that into account when trying to save the policy. 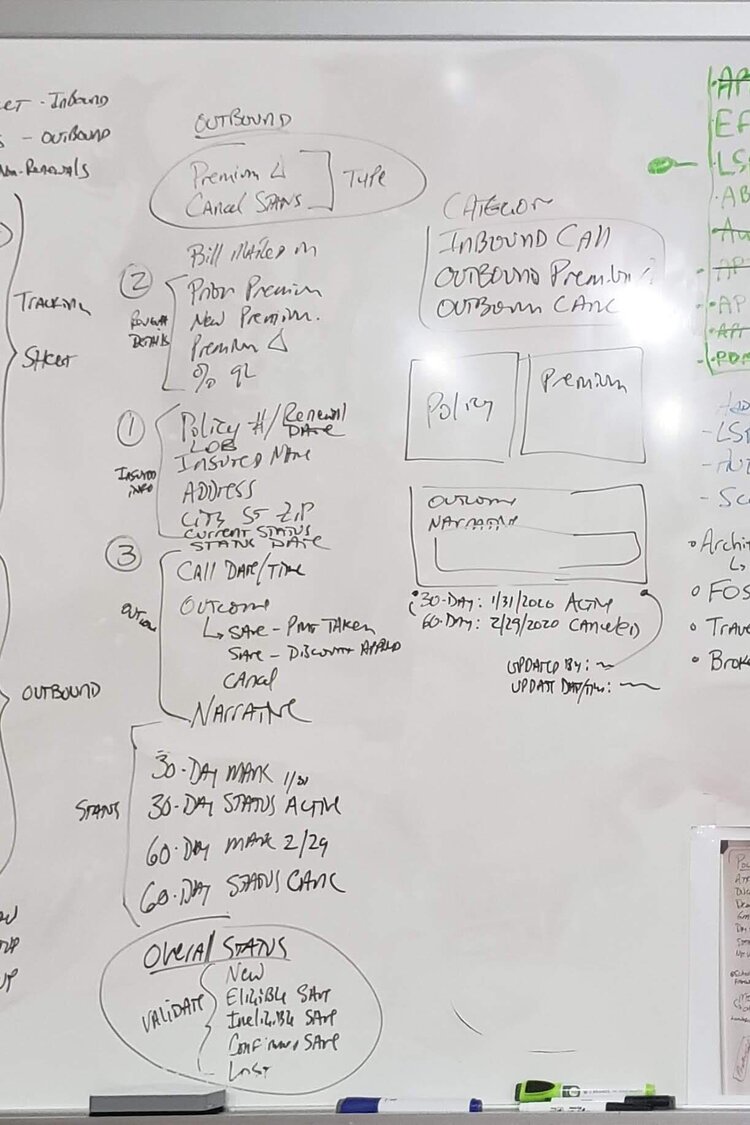 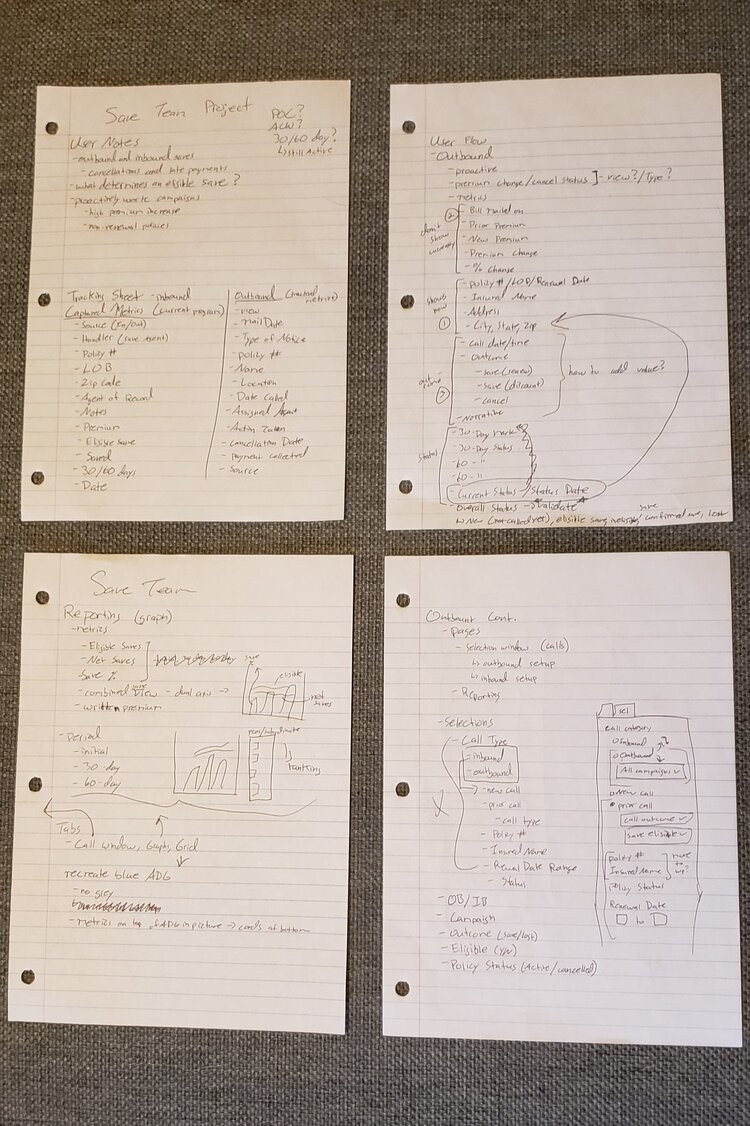 Once our whiteboard markers were out of juice, we moved to Adobe XD. I utilized a wireframe UI kit to put our drawings on the screen. In our first iteration, we built out input fields for Policy Information and Premium Information. It was later determined that these fields would be pre-filled, and the only input section would be the Narrative section, now called the Call Window.

We developed three tabs: call window, graphs, and grid. The call window displayed information for inbound and outbound calls. The goal of our design was to create a screen that showed the call center employee all the information they needed in a clean and intuitive manner. In some cases, these employees would need to find a customer while they are on the phone, so time is of the essence. We also utilized iconography and color to more efficiently convey information such as statuses, premium information, and save metrics.

We developed a feature called 'Campaign Mode' in the Outbound workflow where the user can be delivered calls one after another until they reach the end of the list. The user simply dials the phone number displayed, enters a call outcome from the dropdown list, and clicks 'Next'.

The two other tabs in the application would serve as a reporting hub: one in a graphical format and one in a tabular format.  The graphs tab would show save metrics over the initial, 30, and 60-day periods along with ranking employee performance, and the grid tab records all metrics by employee as well as in the entire department.

After presenting to the client, they requested the implementation of an additional metric to track call productivity (the number of outbound calls worked vs the total number available).  This metric was added to the Graphs tab and acts as a way to measure efficiency improvements in the new application.

The client presentation in fact went so well that word traveled to another regional branch and a subsequent demo was shown, furthering the ability to track all Save Team performance across the entire company instead of for only one region. 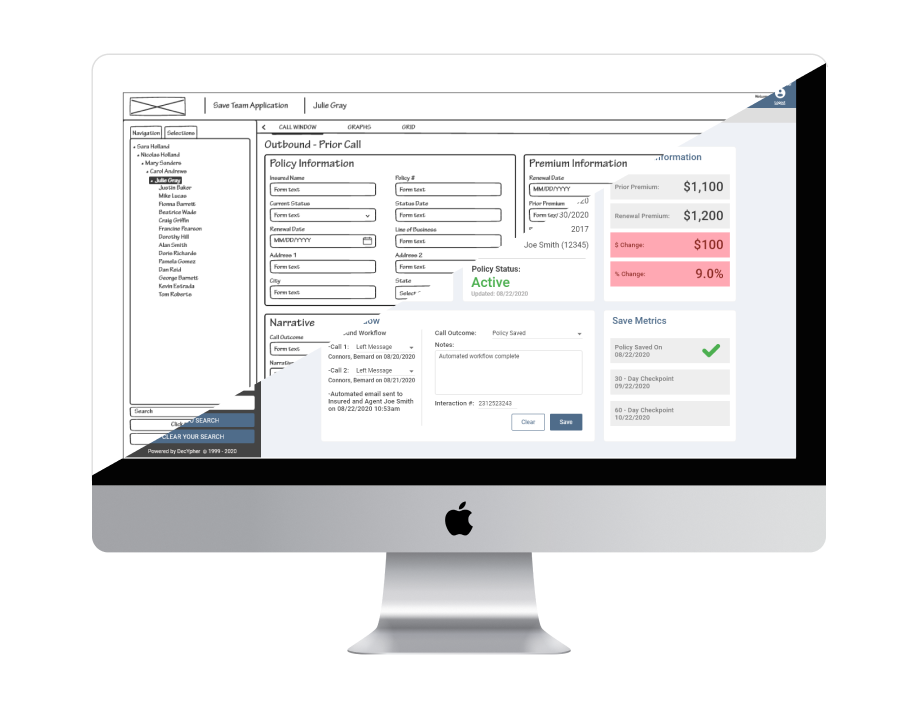 Iteration is critical - The designs changed so much from the wire frame to high-fidelity stages just as a result of seeing the content on the page and reorganizing, adding, or removing content.  The more we walked through a user flow, the more we saw ways to streamline the process, remove unnecessary items, or add things that would improve functionality.  When we presented to the stakeholders, they also had a short list of items to add in addition to the requirements that were discussed.

As mentioned in the solution, a second demo was presented to another regional branch at the company.  This adds an opportunity for us to expand the scope of the application and improve efficiency for more users.  Coordination between both regions is key to determine if both of their needs can be met with one application or if different variations of the application is needed.

Back to Top
Design System