A large insurance company approached us with a request to build a dashboard for a fourth quarter incentive program.  A prize pool of $4M was invested in this promotion, and once an agent reached a $12,000 qualifier, they could snag a share of the prize money.

Increase production over the fourth quarter and incentivize insurance agents to reach a $12,000 threshold to be eligible to receive prize money.  This promotion would include over 10,000 agents around the U.S. and would need to show: 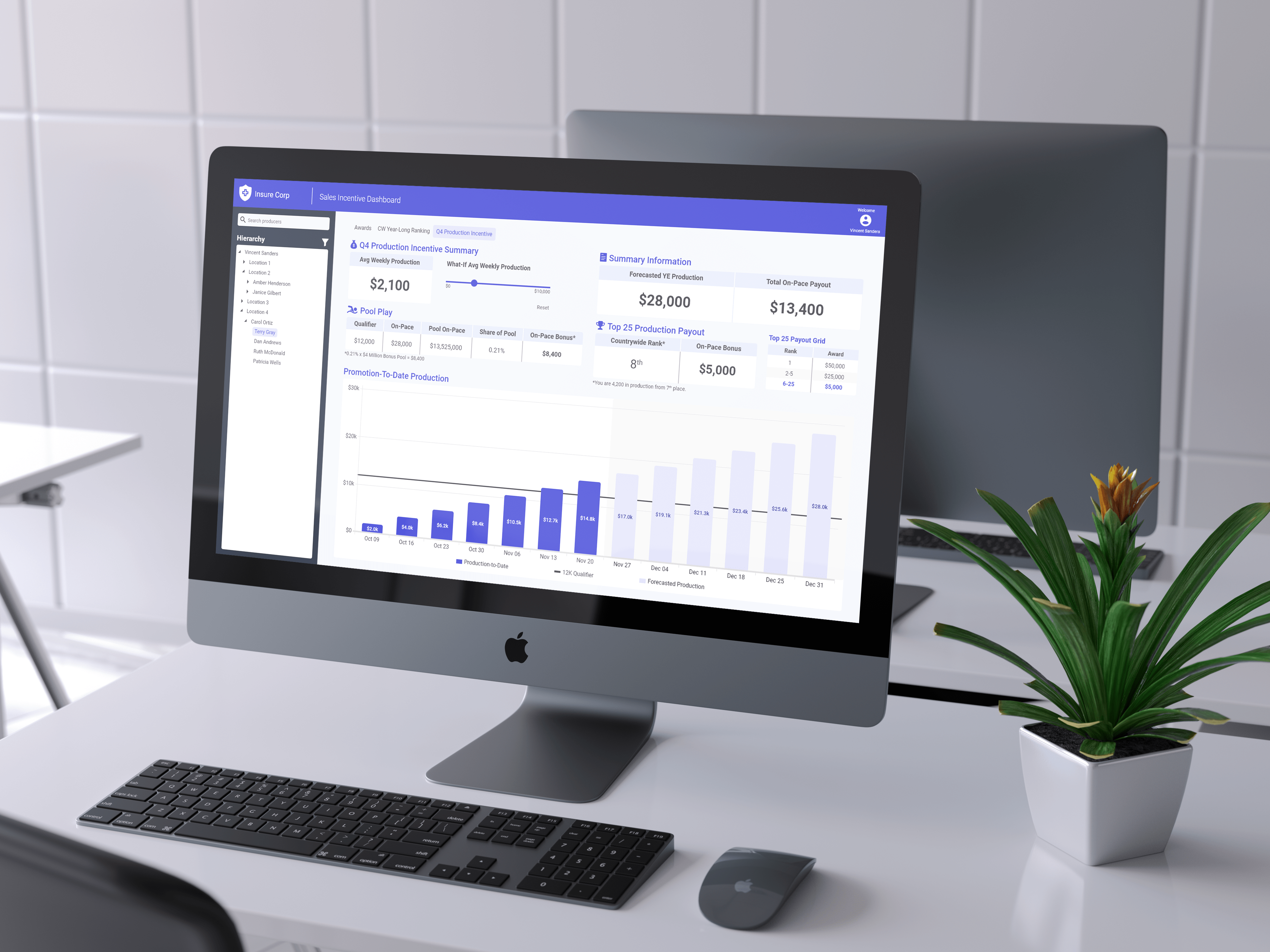 We met with stakeholders to determine the objectives, scale, and timeframe for the application. The most important elements were: clearly displaying the rules, showing current production, and showing forecasted production.

Once we defined the objectives, the design process began with Information Architecture; determining what elements are most important and organizing them accordingly.  Average Weekly Production was determined to be the most important metric because it is the biggest contributing factor to an increased bonus.  The What-If slider and Summary information helps the user visualize how their projected bonus would be impacted by an increase in the Average Weekly Production.

As with most of our other projects, the early sketches began on the back of some scrap paper. We then conducted a whiteboarding session, where a group consisting of a project manager, designer, and several front and back-end developers locked ourselves in a room and started a coffee fueled design showdown.

When it was time to move to a high-fidelity mockup, I created the dashboard in Adobe XD. We continued moving around the four top sections until we had a consensus of optimal information architecture. The 'What-If' slider took center stage, so to speak, and was placed in the top left corner for enhanced prominence. The slider was used to update the rest of the dashboard based on changes to the Average Weekly Production. All other information would depend on that in order to give the agent a clear view of where they stood and what their future could look like.

Once we completed the high-fidelity mockup, we presented to stakeholders and iterated the design until they were happy with the design. 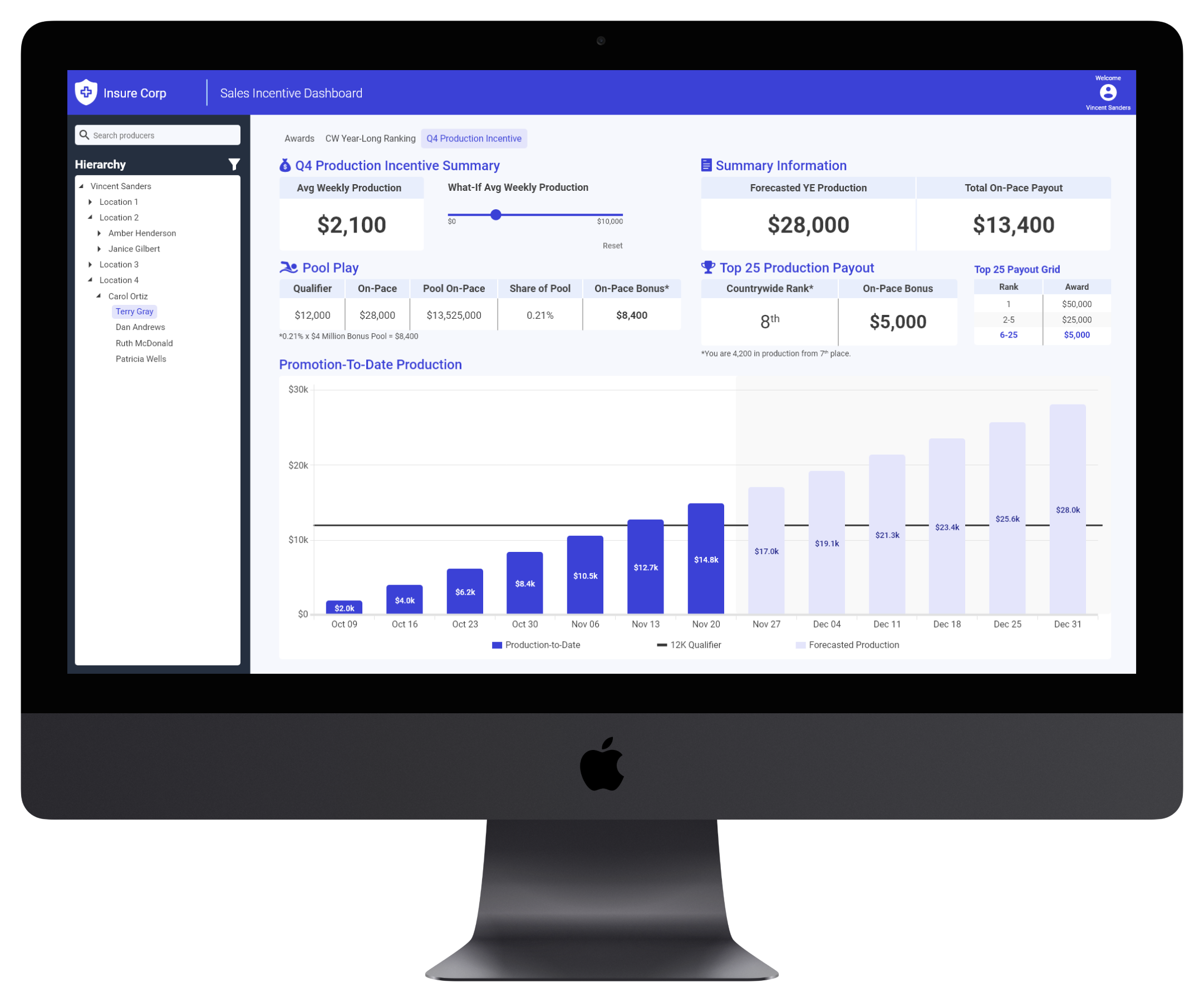 We built a simple, clean dashboard for agents to easily see their current and forecasted production, as well as what their on-pace bonus payout will be.  We added a note in the ‘Top 25 Production Payout’ section to show how much more production the next agent above them has in order to add gamification and incentivize them to go the extra mile. Armed with this information, the agent can use the ‘What-If’ slider to see how their estimated bonus and ranking would change if they increased their average weekly production for the remainder of the promotion. 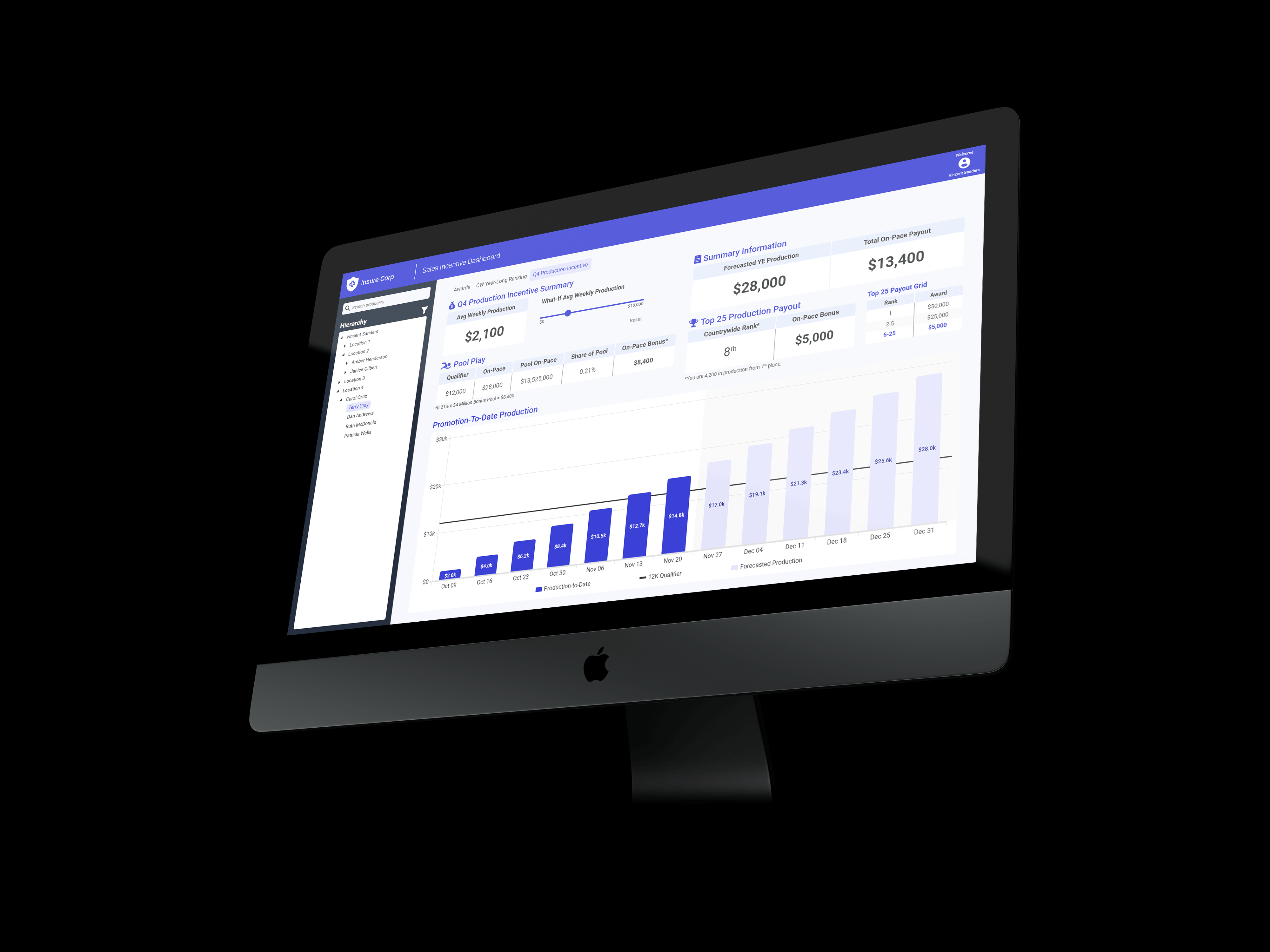 Think ‘how can I take this to the next level?’ - When we were approached with this project, all the client wanted was a dashboard where the agent can see their production and what they were on-pace to earn.  Once we included all the required data points, we asked ourselves how we can kick this up a notch.  We opted to include a ‘What-If’ slider to add some interaction to the dashboard and push the agent to go the extra mile.  When you can see the road map laid out in front of you for how to reach a higher bonus, it can be really motivating.

We have developed lots of sales promotion applications over the years, many of which for the same clients.  After a sales promotion is completed, the application typically fades away unless it is dusted off and used next year.  Having a single place for agents to see their entire history of promotion earnings and earn awards or badges for hitting certain milestones would be a great way to add a pinch of gamification to the mix.

Back to Top
Design System